Aston Halo Review… Is This £200 Mic Reflection Filter Really Worth It?!

Is the Aston Halo worth it? Or should you save your £££?

When considering doing this Aston Halo review, we were at first a bit hesitant. Why?

Because not only is there a lot of scepticism around mic isolation booths, but when it comes to the Halo, we’ve got to admit that we’ve got a slight crush. Well, we say slight… we’re HUGE fanboys! So as you can imagine, the thought of doing an Aston Halo review seemed to be treading awfully close to being bias. Which it kind of is, but we’ve decided to give it a go anyway, as a way of disciplining our fanaticism about this remarkable mic isolation shield.

Okay, so we’ll put it out there from the offset. We think the Aston Halo is well worth the price tag and that none of the alternatives really come close. Hats off to you guys at Aston – we salute you. But obviously, you don’t want to hear that. Instead you want to know how we’ve reached this rather stark conclusion, before you put your hand in your pocket and give Aston 200 or so of your well earned British pounds. So that’s precisely what this review will be. Our fanaticism unpicked and the Aston Halo spelled out to you in black and white.

After something specific about the Aston Halo? Or just wondering “does a reflection filter work?” Use the menu below to navigate to the relevant part of our Aston Halo review in one click…

What is the Aston Halo? Here’s the specs…

Right, so before we put this mic isolation shield against its most fierce rivals, it makes sense to first give you a rundown the Aston Halo specs. That way when you go onto read the rest of this review, you can be clear about exactly what the Aston Halo mic isolation booth offers + why we’re so crazy about it!

All of which then means you can make a fair comparison and of course reach your own conclusion. After all, everyone’ setup is different, as are their requirements,, so while we might think the Halo’s worth every penny, you might think different. So let’s gets into it – here’s everything you need to know about the Aston Halo reflection filter…

“One of the most effective reflection filters on the market – period. Even Drake’s been spotted using one!” – Alex (Editor)
Latest Price!

How do you use the Aston Halo?

You can use the Aston Halo virtually anywhere.

In fact, that’s the great thing about it. You don’t need a treated room to get solid sounding vocals out of this mic shield. Neither do you need expensive equipment – all you need is a decent condenser mic, XLR cable as well as a good pop filter and you’re practically ready to start recording.

As for where, to quote Aston “the world is your studio”, as this shield means you can even get quality recordings in a place that’s packed full of reverb or background noise. There’s even been some artists that have manage to record songs outside thanks to the ingenious engineering behind the Halo! Oh and as if that wasn’t enough, Drake was even spotted using the Aston when recording in his luxury apartment in Toronto.

How do you attach an Aston Halo?

Another perk of the Aston halo is how easy it is to set up. Here’s the process broken down into 4 easy steps…

Aston Microphones Halo: The good, the bad & the ugly

Okay, so now you’ve clued-up on the Halo and aware of what it is and how it functions, you’re most probably itching to know what makes it so good, as well as its potential pitfalls. As with any product, the Halo comes with its own set of pros and cons. Both things it’s wise to know before putting your money where your mouth is.

So to help you make a good all-rounded decision, we’ve picked apart the Aston Halo to bring you the good, the bad and the ugly…

Pros of this reflection filter (AKA the good)

Cons of this reflection filter (AKA the bad)

Is there an Aston Halo Alternative? How does this mic shield compare?

Give yourself a pat on the back as by now you should be well clued-up on all aspects of the Aston Halo and potentially even why it’s the mic isolation booth for you.

However, don’t be so quick to jump to conclusions. After all, the Halo is just one in a sea of mic reflection filters all competing to help you achieve the best sound in acoustically challenging environments. Exactly why seeing how the Aston compares to its rivals before concluding it’s the ‘go to’, would be a wise idea. So we’ve decided to do just that and pit the Aston Halo against the sE Reflection Filter X, as well as the rather controversial Kaotica Eyeball…

The sheer difference a Halo makes to vocals is nothing short of phenomenal. Get your hands on one of these and you’ll soon see what we mean. Sing or spit your rap bars into a Halo and almost immediately your vocals are more focused and noticeably tighter in the low end. They’re just so much more pronounced than you get with a bare microphone setup. All of which makes post production 10x easier, especially if your recording environment isn’t what you’d call soundproof.

Then as an actual product, the Aston shines too. Compared to its competitors it’s significantly better value – considering you can pay pretty much the same for what is essentially a ball of foam (the Kaotica eyeball), we’d even be tempted to say that this bespoke mic shield, with it’s innovative PET felt and acoustic ribbing isn’t just good value – it’s a bargain!

And now of course you could say that £200 for what is essentially a shield made of plastic bottles is overly extortionate. But don’t be too quick to judge, especially if you’re an independent musician. Reason being that once you consider how the Halo could replace a vocal booth, it suddenly looks nowhere near as pricy.

Consider how many hours of studio time this iso booth would set you back and it’s won’t actually be that much. Then compare that to your studio time costs over a year and yep… now you get why we love this thing so much. It’s a one time purchase that keeps on giving. Plus, unlike the majority of mic isolation shields, the Aston Halo is made and designed in the UK. So by opting for a Halo, not only are you getting serious value for money, but you’re also supporting British business – exactly what we need after Brexit!

In fact, the only instance where we think you should think twice, or at the very least assess whether a Halo would be worth it, is if you don’t really need a mic isolation shield full stop. In other words, you’ve already got a fully sound-treated room or free access to a professional studio. In which case, this purple shield would serve more as a prop than a functional piece of equipment. But saying that, it would look pretty killer as part of a music video, and certainly screams “pro producer” to any artist who walks into your studio.

So is the Aston Halo worth it in 2022? Is that really a question?

Enjoy this Aston Halo review and eager for more? Don’t miss out on all our latest Music Kit Reviews, as well as the lowdown on all things Music Production. Recently we’ve also done a full in-depth guide to the Best Condenser Microphones Under £500 + if you’re not on a budget, the Best Vocal Microphone For Recording.

Or if you’ve still got a burning question that we haven’t yet answered in this Aston Halo review, keep reading… yes, there’s more!

The lowdown on the AH + reflection filters in general

And while of course that does mean that the Aston is heavy in comparison to it’s rivals, as a piece of studio kit it’s actually quite light. Mic stands, boom arms and mixers all weigh in at far more and also prove to be a lot more difficult to transport, either due to all the pieces or the fact they’re just so delicate.

To be honest the only pieces of studio kit that we can think of which are lighter than the Halo are pop filters, as well as some of the smallest midi keyboards. So really while the the Halo is more weighty than its rivals, if you ask us, it’s not that much of a bad thing, especially when you consider just how effective it actually is.

Despite what the sceptics say, reflection filters do work to some extent. However, it’s to what extent that really matters. Take the Kaotica Eyeball for instance. While it does work to reduce the level of reverb, it’s nowhere near as affective at doing so as the Aston Halo. A reflection filter that offers a different level of sound isolation to those made by sE, and so on.

The whole idea behind a reflection filter is to enhance your vocals and bring them forward. Do so and when you come to mix, the whole process should be a lot more straight forward. An easy way to think of it would be that your reflection filter is the acoustic equivalent to a vocal plugin. It allows you to alter your voice and refine your sound. But as for their use, there’s really only two instances where you’d use a reflection filter when recording vocals.

One being to lessen the amount of reverb/ echo that you have in your recording environment. So for instance if you’re a bedroom producer using an untreated room, then a reflection filter or isolation booth would be a wise idea.

The second reason to use an isolation filer would be because you’re in a busy environment and want to reduce or deaden the level of background noise. A good example would be recording on the beach, or a busy subway. Somewhere that you perhaps want to feel the atmosphere, but not have it take over your recording.

The Aston Halo is made of a special form of PET felt, to which Aston own the patent. Now this form of PET felt means that the Aston Halo is actually made of 70% recycled material. How? Because it’s made of recycled plastic bottles, similar to that you find in eco cars like Teslas and the BMW i models. It’s an eco-take on sound design, which may we add, isn’t just a gimmick. This eco-felt actually works!

In fact, the felt on the Aston Halo is said to work better at absorbing sound than traditional foam – the standard for a mic isolation shield.

The Halo Shadow is basically the Aston Halo, with an added dose of stealth.

Reason being that unlike the original launch edition of the Halo, it doesn’t have purple felt inside or grey felt clad down the back. Instead the felt on the Aston shadow is much as the name suggests – it’s all black.

So if you’re not that keen on purple, or just want to keep the fact you use a Halo low-key, then the shadow edition may be just what you’re after. Saying that, we’re big fans of the purple, but each to their own. 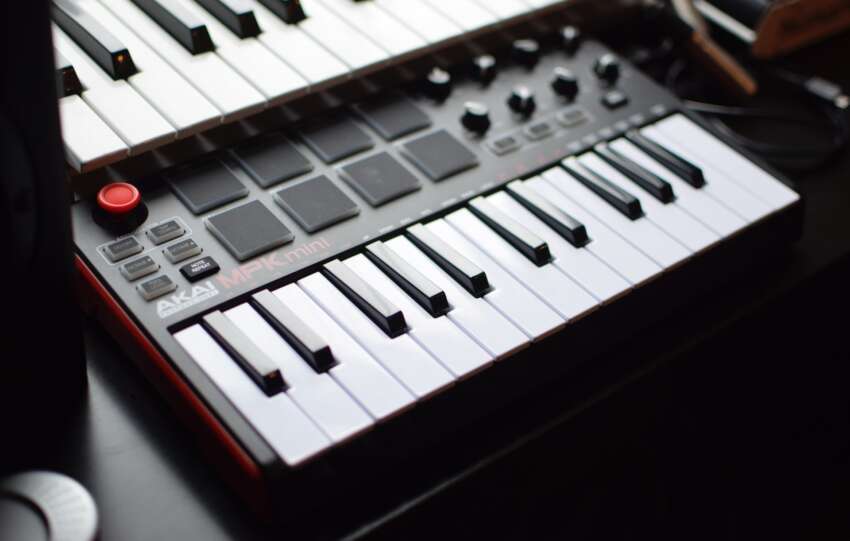 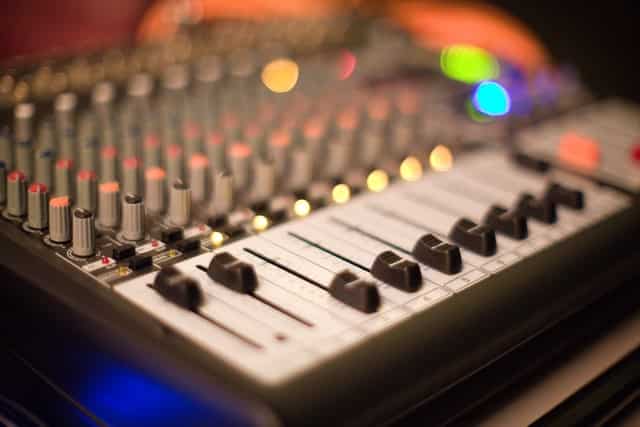